Through the process of photosynthesis, plants are mediators in the environment.  From our perspective plants provide us with oxygen and form the basis of our food chain by making sugars.  From a plants perspective we, and all other aerobic life forms, are the basis of their food chain – the carbon dioxide suppliers.  Linking soil and air plants combine elements of mineral and sunlight to build the substances of their bodies.  Just like us, plants require minerals.  They obtain macro and micro nutrients, such as iron, sulfur, calcium, and magnesium from the soil.  But some are able to survive conditions where there are toxic substances present.  It is not news that plants can survive a wide range of conditions, frequently occupying very specific ecological niches.  Our relatively new investigations are into how some plants are not only able to survive toxic conditions but can ameliorate them and can be employed as mediators in their clean up.  This is an exciting development as it offers and sustainable and comparatively non-invasive way of effectively dealing with challenging contaminated sites (Mench et al 2009).

What toxic conditions are these you ask?  You can easily imagine a mine dump or contaminated effluent situation, fairly commonly described in the literature.  In these cases metals such as cadmium, lead, cobalt, copper, mercury, chromium, nickel, selenium and zinc are of great concern with regards to the food chain (Branzini et al 2012).  Greater consideration is being given to compounds known as xenobiotics that are accumulating in the environment and food chains.  The majority of these toxic situations are as a result of human activities (Mench et al 2009).

But how do plants cope with these conditions?  Where do they put the substances that they are absorbing? Studies have looked at the mechanisms that plants employ when taking up these substances, as well as their genetics.  Plants sequester the toxic compounds in vacuoles and cell walls, and they may also produce exudates through stems and leaves (Azzarello et al 2012).  There are papers on genetically modified plants being utilized to clean up environments (Vangronsveld et al 2009) and on locating native species that facilitate restoration of landscapes (Salas-Luevano 2009).  As one would expect even those plants able to cope with challenging conditions have their limits.  Work with Pauwlonia tomentosa indicates inhibited growth and leaf production which, at the cellular level, is connected to damage to the chloroplast (Azzarello et al 2012).  Sesbania virgata is remarkable, being able to germinate and grow in certain toxic conditions, but it does become challenged when there is more than one toxic element (Branzini et al 2012).  Like P. tomentosa, S. virgata appears to concentrate the metals taken up in the roots, limiting translocation to the stems and leaves.

Basically there are three strategies that can be employed in
phytoremediation: phytostabilization, phytoextraction and phytodegradation.  Each strategy requires different characteristics of the plants that might be selected (Vangronsveld et al.  2009).    Hyperaccumulators that take up the elements and translocate them to shoots and leaves are useful candidates for phytoextraction.  In some cases the material is harvested and can be remined or utilized in other ways (for examples Salix sp. grown on toxic sites and harvested).  Of course the concern is that the toxin not enter the food chain as a result of phytoremediation.  Native species are prominent candidates in situations that would benefit from phytodegradation.  Here the microbial relationships that the native species have with bacteria and fungi create optimal conditions in the rhizosphere to transform toxins that might enter groundwater (Mench et al 2009).  This is particularly effective in the restoration of land affected by xenobiotics.

Where do we find these plants? Are there naturally occurring suites of species that prefer these toxic conditions?  It seems that there are many plants that can utilize trace elements that are present at toxic levels, and some, for example the metallophytes, actually prefer these conditions.  There are specific taxons that have been utilized repeatedly, in particular the Poaceae and Fabaceae, the genera Salix sp.  and Populus sp.  (Vangronsveld et al, 2009; Mench et al 2009).  But the unique nature of each contaminant situation and the individuality of species means that there is great scope for research.  In particular we need a greater understanding of relationship: contaminant and soil conditions, plant and soil, plant and contaminant.  The nuances prevalent in each environment ensure that we need to broaden our understanding of the mechanisms plant species utilize in these conditions.  We have some generalizations to guide us, for instance hyperaccumulators appear to have high levels of transpiration, plants that work best in phytodegradation have extensive root systems and of course the species has to tolerate the toxic conditions.  But just because a plant forms mycorrhizal relationships does not necessarily mean it can be employed in phytoremediation.  And this results in a situation that fascinates me: the interaction of the social, economic and the academic.

The details of the leaf cell in a hyperaccumulator is the business of a biochemist or maybe microbiologist, but it is the landscape designer or land manager who is desperately seeking a list of species that can be utilized.  A piece of land needs to be restored or treated because of potential health or environmental dangers, but someone has to pay for the plan and intervention (and the research behind it).  And so we begin to arrive at some practical questions: would it be alright to utilize an introduced, invasive species known to remove toxins from the landscape if the work on native species is not done?  What is the cost of looking for a possible native species?  Is it possible to create a field test, or relatively rapid test, to locate local species that could be utilized in land reclamation and restoration projects? 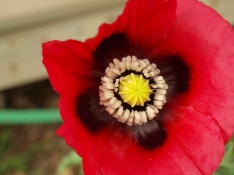 We might be very familiar with the red poppy (Papaver rhoeas), a European native 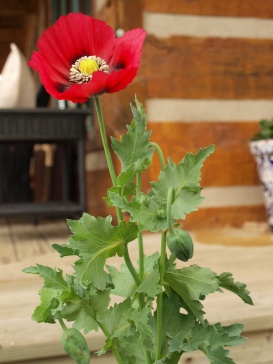 common in disturbed areas, or even the yellow Californian poppy (Escholzia californica), native to the USA.  But we might not be so quick to recognize the prickly body of the White Prickly poppy (Argemone albiflora).

This Texas native is a survivor, preferring to grow in disturbed and nutrient poor conditions.  It can be seen on the roadside in many southern states and has a rose-pink variant in Southern Texas.  An annual or biennial, it has delicate paper white flowers beloved by bees and butterflies but shunned by deer and cows.  Probably because it is very prickly and toxic.  It produces copius quantities of seeds and would possibly be a good candidate for restoration in very disturbed sites where people would not necessarily pass to close by.  Given it’s deep root system I wonder if it would also be a candidate for phytoremediation?

Unless otherwise stated all images are the property of D. M. Mann
Loading Comments...