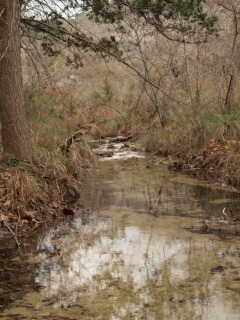 Nothing should be taken for granted.  Out at the Bamberger Ranch last in February we were treated to early wildflowers.  Over the past three years I have been out to this private ranch at the same time and we seldom have any flowers to look at.  This year, a mild winter and regular spring rains have filled rivers and encouraged early flowering of several different species.  Colleen Gardner, executive director, told us that from September 2010 to September 2011 they had had approximately 4 in of rain.  Since then they have had approximately 6 in and it is still coming! 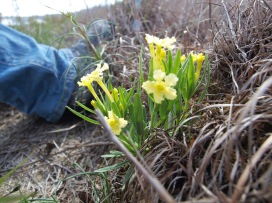 And so the flowers bloom.  One in particular caught my eye – Puccoon or Lithospermum incisum.  This perennial is found in the majority of the states in disturbed and open areas near woodland.  In some states it is endangered or even eradicated!  The plant pictured here was on the side of a path at the base of a steep limestone hill.  It appears that plants that are found from Kansas south are typically smaller than those found to the North (Govoni 1975).  Flower form and vegetative characteristics vary greatly, independent of one another and depending on environmental characteristics.  Generally wetter conditions produce bigger plants.  The flowers are not always obvious as they are sometimes hidden by leaves.

The very beautiful but relatively scentless flowers can be seen from March to May in Texas and into July in other states.  Surprisingly these pretty flowers are mostly sterile!  Later in Spring and Summer puccoon plants will produce hidden flowers that will self-fertilize without opening.  This type of flower is said to be cleistogamous.  This condition is not as rare as you might think.  The genus Viola sp.  and many grasses utilize this reproductive mode.  Some species are known to use it in response to damage or environmental stress.  The opposite of cleistogamous is chasmogamous which describes flowers that open before fertilization and are usually cross pollinated.  Interestingly annuals are frequently cleistogamous (or self-pollinating) and perennials are cross-pollinated.  Whatever the breeding system is the literature suggests that annuals are more succesful than perennials at setting viable seed (85% in annuals and 50% in perennials – Wiens 1984).  So I am left with three questions:  Firstly why does Pucoon bother to have such beautiful flowers? Secondly, what is the genetic make up of this curious species and Is there a way to grow this flower horticulturally so that it could take the place of Pansies or other spring bedding plants?

Govoni.  1975. Evidence for Divergence in Lithospermum incisum Lehm. in the Western Great Plains.

4 thoughts on “Things are never quite what they seem”